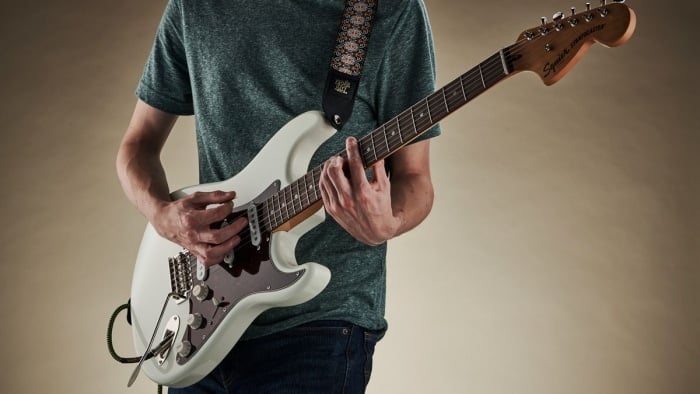 Selecting a musical instrument to play might be a difficult task. Two instruments, for example, the bass and the electric guitar, are very similar, especially if you have seen them for the first time.

So, how to tell the difference between bass and electric guitar?

They’re two very different musical instruments, but they work well together. The melody comes from the electric guitar, whereas the beat comes from the bass guitar, which has a considerably lower tone.

Finally, the bass has fewer cables and seems to be longer than its electric guitar counterpart.

This article will show how to distinguish between a bass and an electric guitar and answer some frequently asked questions related.

Let's get right into the details!

The bass guitar is usually a little bigger than an acoustic or electric guitar.

It has four strings and is pretty similar to its guitar counterpart, with the exception that its notes are roughly an octave lower.

As a result, it typically serves as an accompanying instrument together in a band. The bass offers a solid basis for the guitar to perform on. The bass often collaborates with the drums to produce a beat, based on the genre.

There are six strings on a typical guitar. An acoustic or electric guitar, as opposed to the original bass, is frequently responsible for delivering the song's primary melody. 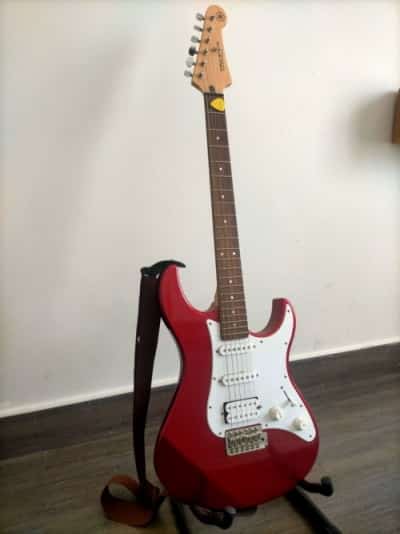 Music producers use guitars frequently to perform solos or riffs. While both the guitar and the bass are capable of being both straightforward and complicated to play, the electric or acoustic guitar may provide more choices.

How To Tell The Difference Between Bass And Electric Guitar?

If you are brand new to music, especially musical instruments, you might not even know the distinction between a bass and a guitar. These two devices are more alike than you may think.

You can rely on the instructions in the video below to better understand the difference between bass and electric guitar.

One of the most significant distinctions between a bass and a guitar is the strings on each instrument. Most guitars come with six strings, but most basses have just four.

Although the strings of a bass guitar are generally just four in number, they are thicker, longer, and more costly than that of electric or acoustic guitar.

Go for nickel or steel strings if you play electric guitars. For acoustic guitar, you can choose between metal strings and nylon strings for a more light tone. 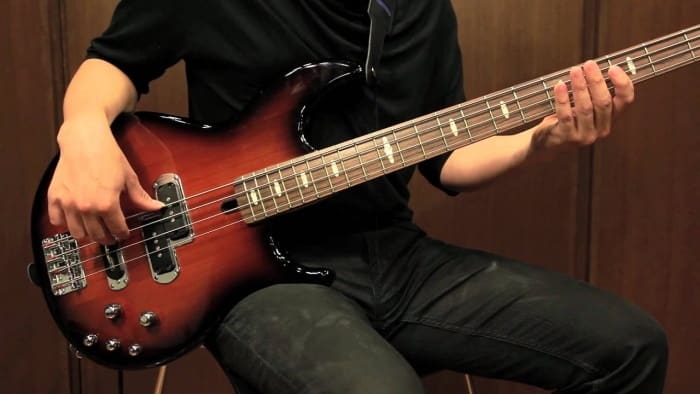 The electric guitar has six strings and is tuned in the E-A-D-G-B-E tuning system. The lowest one is set to E, next is A, D, and so on.

But just now, recognizing how the bass and guitar are connected is more important than memorizing the notes.

The standard bass seems to be a somewhat more extensive instrument with four strings. The tuning of a bass guitar is similar to an ordinary guitar's lowest strings but one entire octave lower in pitch.

As a result, the bass's strings are tuned E-A-D-G, much like a conventional guitar's lowest four strings.

Although inexperienced musicians may find it difficult to distinguish between a guitar and a bass, laying them together will reveal a size distinction.

When discussing their sizes, the term "scale length" is frequently used.

While the overall height of a bass or guitar might vary, "scale length". It measures the distance from the nut to the bridge of each from the top of the pickguard to the bottom where to join the headstock into the neck.

A bass is significantly bigger than its counterpart. While basses come in various scales, they always feature a neck that is longer than a regular guitar's one.

Based on the kind of bass, the neck length, and the frets' space, a bass can contain 20 to 24 frets.

There are many differences between them if you are attempting to choose between a short-scale and long-scale bass.

Because it generally employs a slightly heavier string size, a short-scale one will produce a richer, more meaty tone.

Your preference for an electric guitar and a bass depends on your ability to produce specific sounds.

However, the bass may be simpler to learn since certain songs do not require as many chords. On the other hand, just one note may be incredibly gratifying since the guitar bass can cover the entire room.

In a band, the guitarists and the bassist play separate roles. The bassist's role is to keep the flow and the song going. If you're changing the notes correctly, it seems to be all required in the scenario.

If you want to be in charge of the performance and focus on attention, the guitar could be a good choice. The electric guitar player, who may sing sometimes, is usually at the front of the stage of any band.

Bass solos are far more uncommon than guitar ones. The guitar solos are not complex to fit the music. Many individuals like seeing a guitarist play rapidly.

Furthermore, while chords are less frequent to play like a bassist, the capacity to transition between various chords is essential.

The variations in the accessories of each musical instrument are also noticeable.  Even though their transmitters are interchangeable, they are distinct.

Bass amplifiers' role is to highlight and draw out the bottom end of a guitar bass.

Due to the variable string thicknesses, their picks are also different. Bass pick is thicker than that of guitar to enable for easier string handling and avoid snapping.

Which Is Easier: Bass Or Guitar? 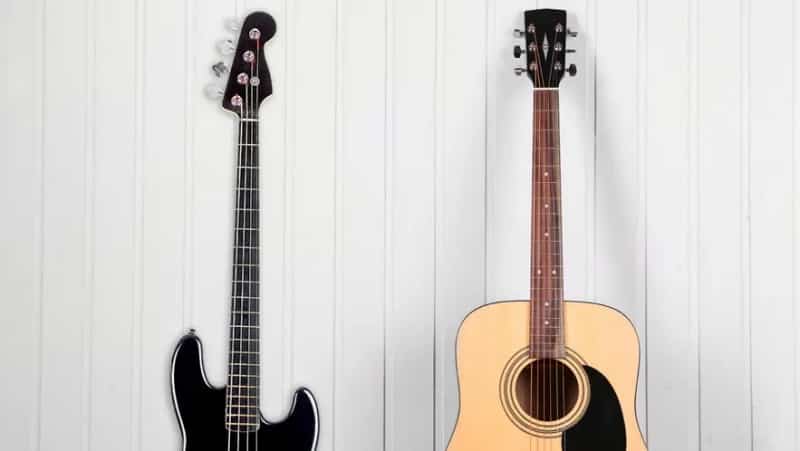 If you are trying to figure out which musical instrument to learn, you might be asking yourself, "Is playing bass simpler than playing the guitar?" "Should I start with guitar and then move on to bass?"

Unfortunately, there is no simple solution to these issues, to be honest.

Whether you choose bass or electric guitar, it's up to you and depends on your purposes. Every music player is different, with their own set of strengths and weaknesses depending on various circumstances.

Learning chords in their many forms, for instance, is perhaps one of the essential things a musician, especially a guitarist, can master.

It's possible that memorizing these chords will be more complex than learning individual notes for bassists.

However, guitar allows players to choose between a rhythm-based approach and a fingerstyle.

Some novice bassists may struggle to acclimatize to the width between bass strings and choose between a fingerstyle or pick technique, particularly those with short or more delicate fingers.

Like the guitar, which gives musicians various ways to express their creativity and favor, while producing bass riffs and basslights resembles making guitar solos rather than chords, the bass delivers a song's constant rhythm.

It is frequently regarded as the bond that keeps a melody together.

As a novice, any musical instrument will be unfamiliar to you and appear difficult. It makes no difference if you begin with guitar and move on to bass. Most skills that you pick up on one instrument will go for others.

Here are some frequently asked questions we have collected while researching this field. You need to take note of some of the questions about this topic.

Is It True That Bassists Aren't Good Guitarists?

This question is a hilarious one. Although several people have adored bass after playing the guitar, this does not imply that they were a failure on the guitar.

The guitar just served as a necessary step to the individual's preferred instrument. Most bassists also play other musical instruments in addition to the bass.

Do I Need To Learn To Play Guitar Before Playing Bass?

No. Studying guitar may waste your time if you genuinely want to play bass. It's preferable, to begin with, the bass since that is what you want to do.

But, of course, if you have played the guitar before and decide to try your hand at bass, your guitar knowledge will offer you a leg up.

How Long Does It Take To Learn Bass Guitar?

It would be best if you learned the fundamentals of bass and a few simple tunes in the same way that you know to play the guitar. Maybe in a couple of months or more, depending on your practice schedule.

You might be able to call yourself a competent player after a year of practising and playing on a frequency.

It generally takes some years of serious practice and performing to master the guitar bass (9 or 10 years if you practice 3 or 4 hours every day).

Learning how to play bass, like any other talent, requires a significant amount of time and work. However, it is well worth the effort.

Read More: How Long Does It Take To Learn Bass Guitar? Some Useful Tips For You

After reading this article, you must have a better understanding of the difference between bass and electric guitar. When you're initially starting, don't be too concerned about distinctions.

Instead, experiment with them to develop your knowledge of how these two musical instruments operate.

Best Lightweight Electric Guitars – The Gifts For All Travelling Singers!