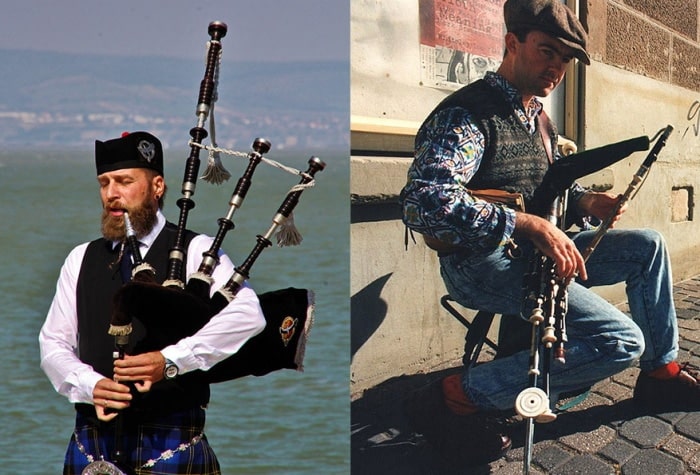 As one of the oldest musical instruments in the world, bagpipes include one bag, one chanter, one air supply, and often more than one drone.

Until the present, the instrument tends to just appear in parades so that people are likely more familiar with two categories of bagpipes, namely Irish bagpipes and Scottish bagpipes.

In spite of the rather identical design and the same tuning, Irish and Scottish pipers are not the ones.

The differences between Irish Bagpipes Vs Scottish Bagpipes are the performance of sound, the playing style, and the number of pitches, scales, drones.

Scottish bagpipes, as well as Irish bagpipes, originated from Celtic Gaelic, so it is not surprising that they look quite similar.

Now, it’s time to see the differences between the two native instruments!

Are Bagpipes Irish or Scottish? You had your answer after reading the above. If you are eager to know more, you can watch the video below to get more information.

As you can distinguish between Irish bagpipes and Scottish Bagpipes, let’s proceed to the part. Although both native instruments have some main differences, each of them has its strengths and weaknesses for players.

In this part, several main differences between Irish bagpipes and Scottish bagpipes are discussed, in terms of comparison of playing style, sound, volume, and design. 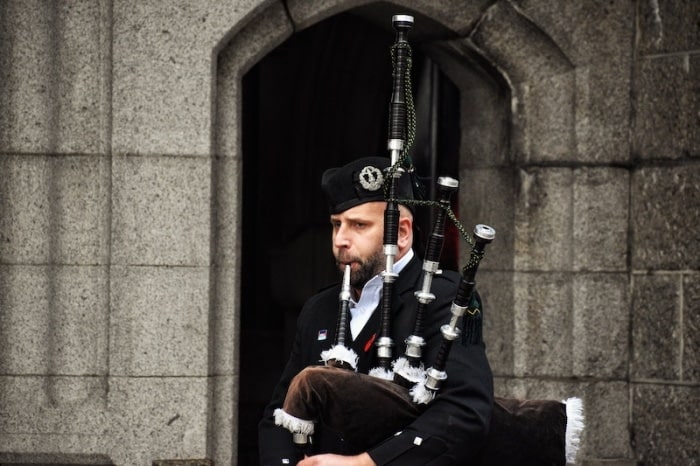 As being wooden wind instruments, both Irish bagpipes and Scottish bagpipes have identical playing styles. The key difference between them is the manner of pushing wind into the bagpipe to produce the sound.

The Scottish tends to rely on the lungs of players. In other words, you need to have a strong and healthy lung to play the bagpipe continually. Players mostly stand while playing the reed instrument in parades.

By contrast, you will need to inflate the Irish bagpipe with the bellow, then contract with the hands to produce the wind in the instrument to operate.

The player more often sits to play the bagpipe because of a more firm hold. Thanks to that, they are capable of controlling the bellow.

Since the Irish type contains a larger number of octaves, it can play a wider range of chords and more melodic tunes than its Scottish relative. 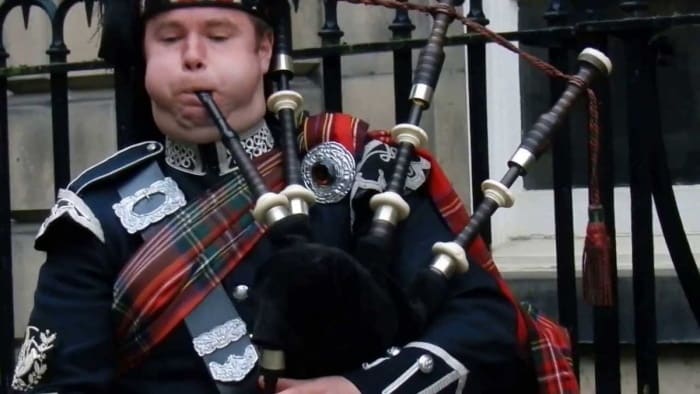 To start with, one key difference between Irish bagpipes and Scottish bagpipes is the aspect of tuning, in terms of octaves and scales. Thus, it leads to two different types of sounds.

The distinguished sounds come from a slight difference in the construction of the native instruments.

The Scottish type contains a single scale, which is known as the Mixolydian scale, followed by an octave to make a match. By contrast, Irish bagpipes feature several scales and often double octaves.

Another cause of different sounds between them is different ways of blowing. Accordingly, the player blows the Scottish by the mouth and inflates the Irish by the bellow.

As a result, a Scottish bagpipe has a more percussive sound, while an Irish bagpipe makes a softer and more gentle sound.

The volume of the Scottish bagpipe is much louder. The reason is the design of its chanter inside the instrument. Consequently, this type produces a more energetic and percussive sound.

The Irish bagpipe has an inner bore with a cylindrical frame. This helps the Irish type make a less strong volume, followed by the soft and warmer quality.

Let’s move to the last contrast and comparison of the two wooden reed instruments in terms of their designs. 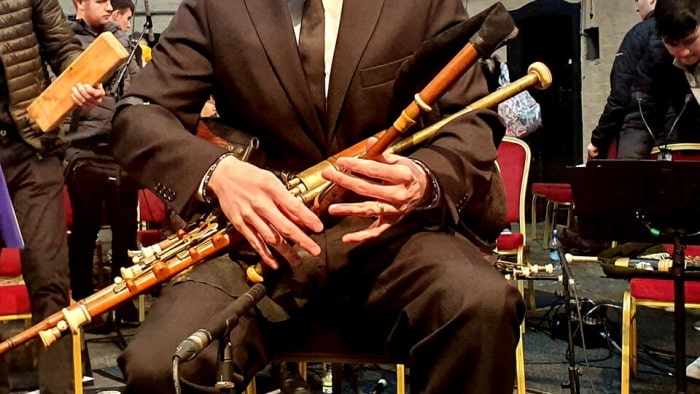 The Uilleann Pipe appears a bit later than the Scottish fellow. Thus, the design is a little more elaborate with a variety of main differences.

As the article has already referred to, the wind for running the bagpipe derives from the bellow but not the mouth of players. The hands will wrap the bellow and push with the elbow to make the wind flow.

The chanter of the Irish bagpipe has the two reeds. They aim to sit on the lap of players. Consequently, a combination of the bellow and the reeds makes the player sit and not stand or march in order to play the bagpipe.

The range of the chanter is bigger. It means that the range can contain double octaves rather than only one.

You can turn on and turn off both the pipe chanter and the drone so that you will achieve better control over the sound that you produce.

One more difference in the design is the regulator. The regulator is a unique part of the Irish bagpipe. It is a group of three smaller regulators and seems like the chanter, accompanied by the hole and the reed.

It sits on the lap beside the chanter.

As the design is more complex, you are able to play a wide range of chords and more melodic tunes on the Irish bagpipe.

Especially, you should remember that the Irish type tends to be much more costly and ask more time to build up owing to elaborate features. 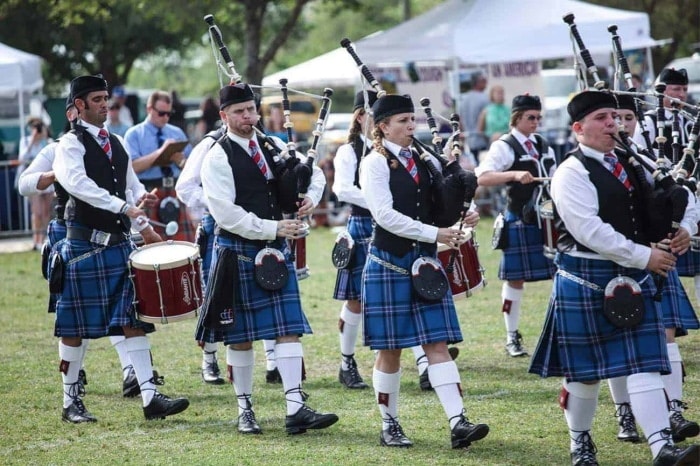 The Scottish bagpipes are the original version. Thus, when it comes to bagpipes, people often think about the Scottish with a loud sound playing on a limited scale.

As the article has referred to, one key difference is playing style - the player needs to blow the wind into the instrument.

The common Scottish bagpipes consist of the pipe, the bag, the chanter, and the drone. To play the instrument, you have to blow the air into the bag with the blowpipe.

The bag needs to be filled constantly during the playing process as it is a reservoir of wind for the bagpipe.

The material of the bag on the Irish and Scottish bagpipe is generally animal skin. However, there are currently more synthetic fibers to decrease the price and make it easy for production.

A Scottish bagpipe has a single chanter with three drones. The chanter has some holes on its body so that you can play the instrument like a flute with your fingers on the holes to take the correct notes.

The drone, which differs from the Irish bagpipe, also has reeds in it, but it does not have holes so that you cannot control it no matter what. The aim is to create an iconic and noisy sound. 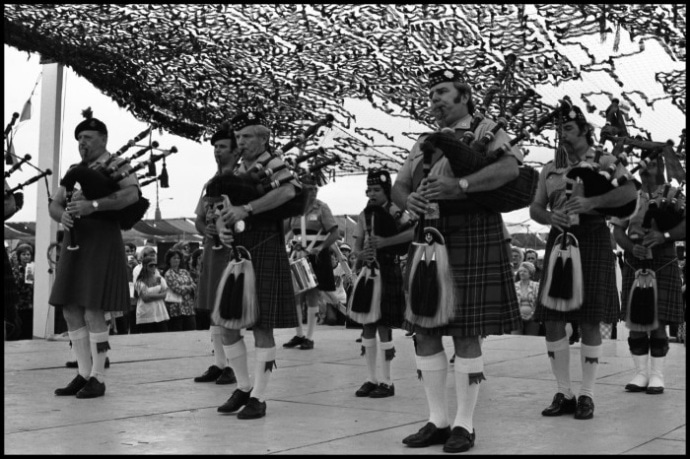 Despite the different times of emergence, Irish bagpipes and Scottish bagpipes have the same origin of the ancient Middle East. Both of them appear across Europe and Asia in almost all traditional folk music festivals.

The Scottish people saw the Romans playing the bagpipe and had begun to learn since that. A lot of notifications show that the bagpipe exists as early as the 1400s, but the present form only appeared in the 1600s.

It became a popular wooden reed instrument by utilization in the army and military field.

The Scottish regiment always carried bagpipers to show musical performances, and they caught much attention with strong and noisy sounds.

The bagpipe gained popularity in the UK and there are numerous variants. The Irish bagpipe emerged at the beginning of the 1900s as an evolution from the original one.

We hope that the article will help you a lot to get knowledge of the two popular categories of bagpipes in the world.

Although they look identical in many ways, you can still distinguish between Irish bagpipes and Scottish bagpipes.

No matter what you pick up, it is fine if you get much involved in learning the manner of playing bagpipes.

The piper is not the trend in the music industry, but it is still very wonderful to create strong and elaborate melodious tunes from the bag, chanter, and drone.

Just ensure that you practice in a separate space where the neighbor or housemate will feel unannoyed.