Banjos and Mandolins are both stringed musical instruments that sound similar to guitars. They do, however, have a lot of distinctions.

The sound is the most significant difference. The Mandolin creates a high-pitched sound that is unique from the Banjo's twang.

In comparison to the traditional 5-stringed Banjo, the Mandolin is smaller and contains eight strings.

The difference between Mandolin vs Banjo will be discussed in detail in the content of the article. Let's explore together!

Consider the distinctions between them if you can't decide between the two. The following are the many aspects of these instruments that we shall compare.

Stringed instruments, such as the Mandolin and the Banjo, are examples. To pick them, players generally use plectrums, also known as pics.

This little instrument appears in the 1700s in Italy and Germany, although its origins may be linked directly to the 1500s mandora.

Pasquale Vinaccia, a luthier from Italy, had had the most influence on the modern size and design of the original Mandolin.

Then, in the 1700s, Italian artists appeared all across Europe with the new, small 8-string musical instrument.

As previously stated, the Mandolin has four pairs of steel strings in total, for eight strings. Therefore, you need machine heads to adjust these strings, just like other steel string musical instruments.

The manufacturer wraps the strings around a fretted fingerboard that is comparable to those of a guitar. Fourteen frets on a typical Mandolin are usually tuned in almost the same way as a viola.

The design of the Mandolin's body, which is evocative of a pear, is perhaps its most distinguishing trait. The manufacturer divides its back into three styles: archtop, a bowl back, and flatback.

The Mandolin, like other stringed musical instruments, has several variants. For example, there are many bowl-back Mandolins and 10 and 12 string variants, and hybrid devices like the Banjo. 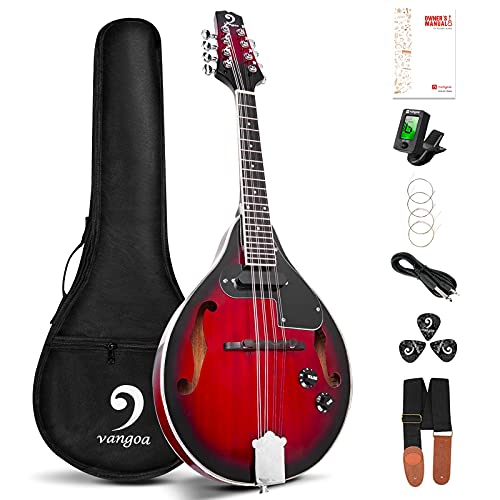 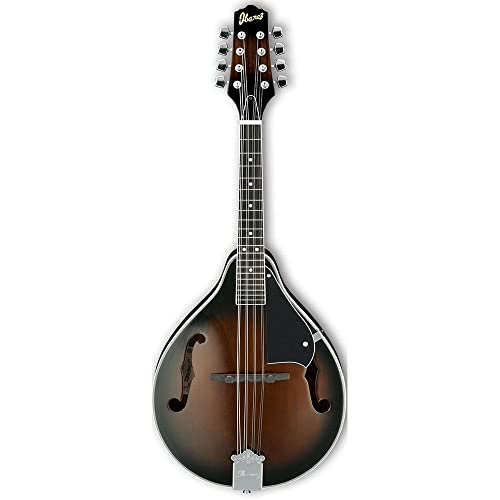 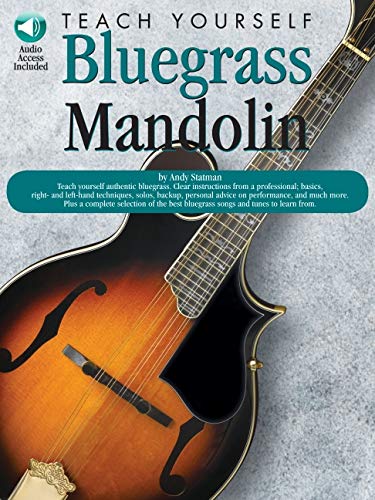 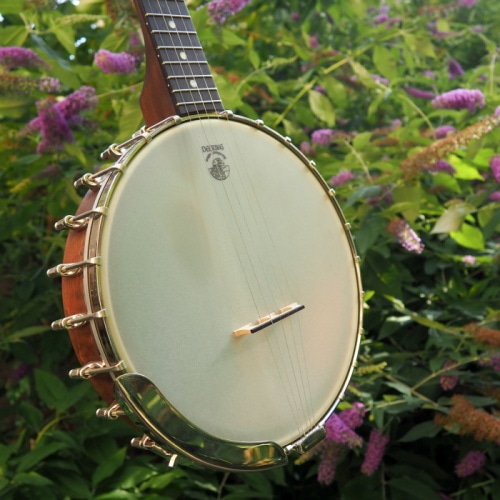 In a nutshell, the Banjo is one of the stringed instruments. It has a very long neck. It features a circular body and an open back that you can open or connect to a resonator. Its body has a drum-like appearance.

The material that the manufacturer uses for covering the 'pot' is parchment or leather that has been stretched over a steel ring.

In that manner, it reminds us of a tambourine. People commonly play the Banjos with plectrums, similar to the guitar and Mandolin. However, fingerstyle is also popular.

The fretted neck is similar to that of the Mandolin. The Banjo comes in several string combinations, ranging from four to twelve. Despite the lack of similarity, it is officially a member of the guitar family.

A Banjo's structure and components can be highly complex, and it is unquestionably one of the most unusual stringed instruments.

In the USA, Banjos are popular in folk songs. People frequently believe that the current version of this instrument may be traced back to the Caribbean. However, these origins might also date back to the 16th century. 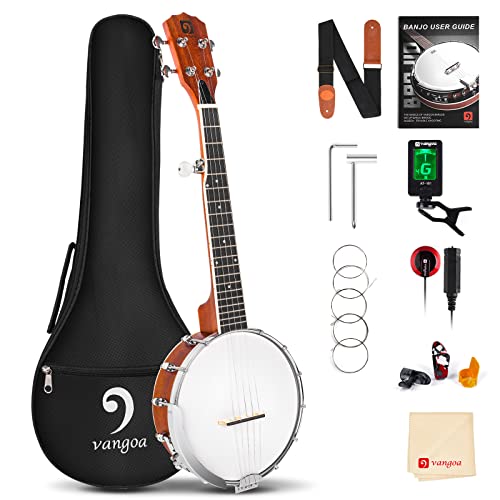 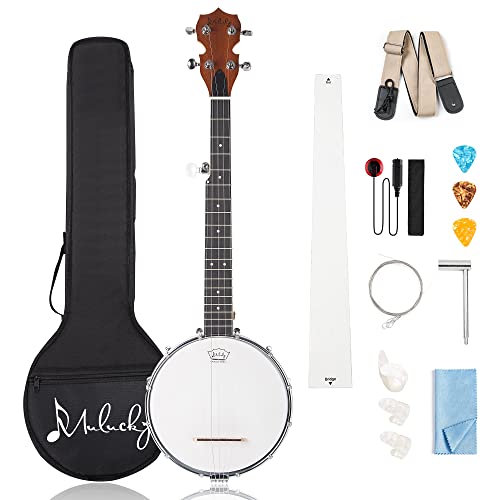 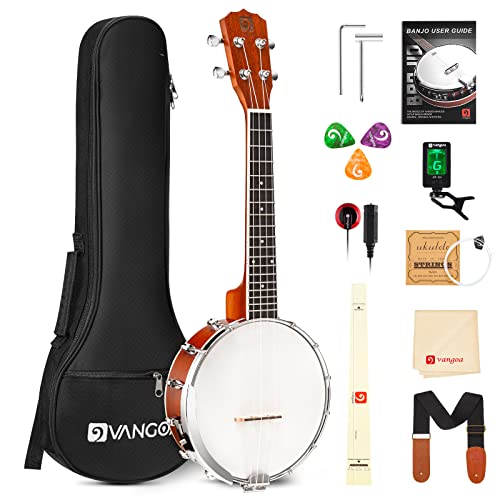 Comparison Between Mandolin Vs Banjo

You can rely on the instructions in the video to better understand the difference between a Mandolin and a Banjo.

Consider the characteristics between a Banjo and a Mandolin if you can't decide between the two. The following are the many aspects of these musical instruments that we shall compare:

The Mandolin's sound is similar to that of a guitar but with a higher pitch. Its sound is identical to strumming or plucking a guitar when you strum the strings.

The tone or pitch, on the other hand, is restricted to higher chords or tone levels.

A Banjo has a twangy and soulful tone. However, the manufacturer also lifts its sound. It may be why they're employed to accompany western-style music and dances.

For the Mandolin, there are four string pairs, which means a total of eight strings. These strings link together, which implies that the pitches of every two of the strings are identical.

The distinctive sound of Mandolins is due to this setup.

The Banjo has only 4 to 5 strings. Therefore, Banjo players generally use their fingertips, a plectrum, or a pick to strum or pluck the strings.

Banjo players employ a variety of plucking and strumming methods. Using picks is a common way to pluck or strum the instrument.

The style of music that you prefer listening to and performing is one of the most important factors to consider when learning the Mandolin or Banjo. The Mandolin commonly appears in secular music.

Musicians performing patriotic tunes might play them. Folk and country music concerts, on the other hand, frequently feature Banjos. You have undoubtedly heard them play in one of the western films you've seen.

In comparison to Banjos, Mandolins' tune is usually lower. Mandolin strings are likewise spaced in fifths of a musical scale. Mandolin pitch is also more significant than that of a Banjo.

In addition, the string arrangements on the Banjo are more varied or modified than those on the Mandolin.

A Banjo's neck is lengthy, comparable to a guitar's. On the other hand, a Mandolin has a short neck that is similar to that of a violin.

Furthermore, the Banjo and Mandolin necks are split into many frets on both instruments.

A Mandolin fretboard is narrower than a Banjo fretboard. Furthermore, the Banjo's neck is more limited than the neck of a Mandolin. Since there are eight strings on a Mandolin, its neck has to be robust.

The main difference between these two musical instruments is in their appearances. The body of a Mandolin is pear-shaped, whereas the body of a Banjo is usually invariably round.

The hollow of these instruments allows them to create sound when strumming or plucking their strings.

A Banjo's body has a flat bottom. The manufacturer generally wraps Its top with animal hide, similar to how people cover snare drums. The majority of Banjos have flat-bottom coverings.

However, some of them have open bottoms, which means the back isn't covered.

Which Is Easier: Banjo Vs Mandolin? For beginner musicians, the debate between Mandolins and banjo has been a hot subject. Both of them are excellent instruments for folk and blues music.

They create different tones, with the Banjo producing a brighter, louder sound and the Mandolin a broader sound. Therefore, which one is the most straightforward to learn?

It all comes down to musical taste. Many individuals claim that both these instruments are genuinely better to comprehend.

Is mastering the Mandolin easier than mastering the guitar? Yes, to put it briefly. It is because there are fewer strings, making the printed music simpler to read.

If you've had a competent teacher, the Mandolin may be extremely basic and straightforward to learn.

Likewise, the Banjo may be relatively simple to master, except for specialized forms like blues music, just like the Mandolin.

However, because blues music is generally played rapidly, it cannot be easy to learn.

Is the Banjo simpler to play than the guitar? Yes. The Banjo has fewer strings than that of a guitar, which is one of their commonalities.

The techniques for adapting these instruments are to obtain a good instrument, get an excellent teacher, and make sure you've picked an instrument you'll like studying since learning is simple when you're having fun.

If you're still debating between a Mandolin and a Banjo, both are simple to learn if you follow the steps below.

Here are some frequently asked questions we have collected while researching this field. It would be best if you took note of some of the questions about this topic.

What Factors Do I Consider While Choosing An Instrument To Play?

Choose the one that best fits your lifestyle. The Banjo is an excellent choice if you prefer folk and bluegrass music.

The Mandolin is an attractive option if you want to experiment with different genres but don't enjoy the Banjo's sound.

Another possibility is to investigate playability. If you'll be playing music with friends and in your home, the Banjo is a good choice because you can play it softly or loudly.

On the other hand, the Mandolin is more commonly used in concerts, although many people also enjoy it alone. For example, a live performer over the Banjo may prefer the Mandolin.

However, based on the tone you want to get, you might try and play both then switch between them. Our interests will change, and we will create new visions when we go through life.

Similarly, you could want to learn how to play the Mandolin one day and the Banjo the next; why restrict yourself when you can learn two things? 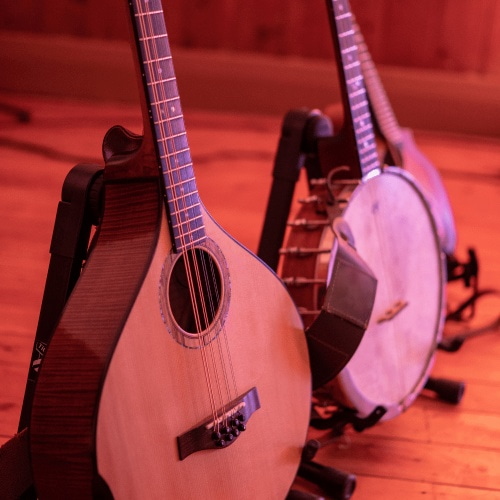 The Banjo's strings are generally tuned in fifths, one octave lower than the mandolin strings. However, because the notes on both instruments are similar, a mandolin musician can tune and play the tenor banjo with ease.

It was done using the identical chords and fingerings as a mandolin, except that the octave was lower.

Banjo or Mandolin: Which Is Easier To Learn For Beginner?

First and foremost, it will be a matter of personal taste, as both are learnable. Nonetheless, most musicians who have played both instruments agree that the Banjo is harder to take up as a beginner.

It features a basic open chord and can play regular melody accompaniments without difficulty.

Based on the comparison of Mandolin vs Banjo above, it is apparent that no instrument is too hard to master if you set your attention to it.

The Banjo and Mandolin have a lot of similarities and distinctions, making them so appealing.

Rather than concentrating on how simple or difficult it would be to master any of them, pick the one you favor and begin learning.

Ukulele vs Banjo - The Difference You Need To Know