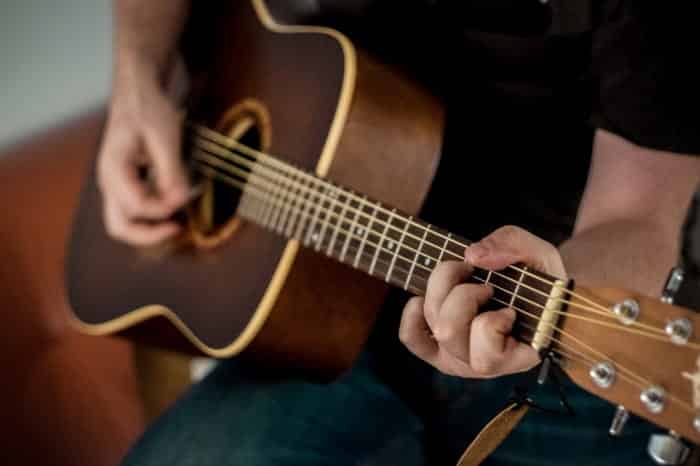 The 7th chords are said to be very basic and simple. As a result, some beginners can quickly play them in opening positions, while skilled players can use them in open tunings or as barre chords.

However, though the notes can be pretty easy to play, there are lots of music songs coming from these simple chords. This post will help you understand how they work and how to play 7th chords on guitar.

What Does The 7th Mean In Guitar Chords?

A seventh chord includes one note plus a triad to form the seventh interval above each chord’s root. Except for specific situations, we usually consider the chord as a dominant seventh chord.

It includes a major triad with a minor seventh. Still, various sevenths come with triads. Hence, there are different seventh chord types.

In the past, guitarists considered the seventh a non-chord tone or an embellishing. They realized that the seventh could destabilize the triad and helped them emphasize movement in a particular direction.

Gradually, the way western people enjoy the music changed, and they were more familiar with the dissonance. Therefore, composers used the seventh as a part of the chords.

Surprisingly, it’s not hard to find 7th chords in every style of modern music.

For example, in blues, the dominant 7th chord is the main element, and in jazz music, you can find the major 7th chord, the minor 7b5, or diminished 7th.

Moreover, there are also the very common minor, dominant, and major 7th chords in pop music.

How To Play 7th Chords On Guitar? – Detailed Demonstration For You

Now, we will get into the topic of playing the 7th chords on your guitar. First off, let’s get more details about these chords.

In this post, we provide you with examples for each 7th chord. Now, take a look at the image below.

As you can see, the root of the first moveable chord stays on the low E-strings, while it is the A-strings for the second.

Guitarists can play a moveable chord in every key and move it all across the guitar neck. For example, with the Gmaj7 chord, your root note stays in the low position of E-strings (in this case – the G note).

If you raise the whole chord to a half step, it will be a G#maj7 chord. As a result, the root note has become the G# note (up to the E-string 4th fret low).

Next, the root note would be an A note for the Amaj7 chord if you moved the chord up by a half step. You can use this method for other moveable chord shapes.

For a more enjoyable time with your guitar, here are some extra tips we want to share with you:

We will add the major scale’s 7th to the major chord.

There are two popular songs with a major seventh chord that we hope you can practice:

The dots with the numbers in the chord diagrams above will tell you the position of your fingers:

Index finger: 1, middle finger: 2, ring finger: 3, pinky: 4. The letter “X” on the top of each image indicates that you need to mute the string, while “o” is for the open strings.

Here are songs for practicing the dom7 chord:

Give a little bit (from Supertramp): dom7 chord is in the song’s first chord; you can hear it before the singer plays a D chord.

Only love can break your heart: you should play the first chord.

In the minor 7th chord, there are a root, minor third, fifth, and flatted 7b note from the major scale. The number symbols for these notes are 1, b3, 5, b7.

Moondance (Van Morrison) and Wonderwall (Oasis) are ideal songs for practicing minor seventh chords. With the first song, you can play the Am7 in the first chord, while Em7 appears in the other song with the second fret’s capo.

Guitarists play the minor-major seventh chord or maj7 with these notes from the major scale: the root, minor third, fifth and seventh notes (1, b3, 5, 7).

To rehearse the minor-major 7th, you can choose Michelle (the Beatles) for Fm(maj7) from the intro’s second chord.

On the major scales, the half-diminished or the minor 7b5 (m7b5) chord has the root, minor third, flatted fifth (b), and flatted seventh (b) notes. The figures for these notes orderly are 1, b3, b5, b7.

Follow this sequence; you can play Am7b5 with the notes A, C, Eb, G, while Em7b5 includes E, G, Bb, D. We picked “Still got the blues” (Gary Moore) for you to practice Bm7b5 (the intro’s first chord).

The dim7 or the diminished seventh chord uses the root, minor third, flatted fifth, and double flatted seventh (bb) notes (1 b3 b5 bb7).

When playing this chord, the combination will shape enharmonically the flatted 7th like the major sixth.

Play A C Eb Gb for Adim7 and E G Bb Db for Edim7. Simultaneously, apply the letters 1, b3, b5, bb7 for each note, respectively.

Michelle (The Beatles) is also the perfect song to practice the dim7 chord (the verse’s fourth chord.)

Hopefully, by spending time on our post, you now understand the main concept of the 7th chords and how to play 7th chords on guitar.

From all the information in this article, we wish you would have more materials to practice and get more inspiration in your music journey.