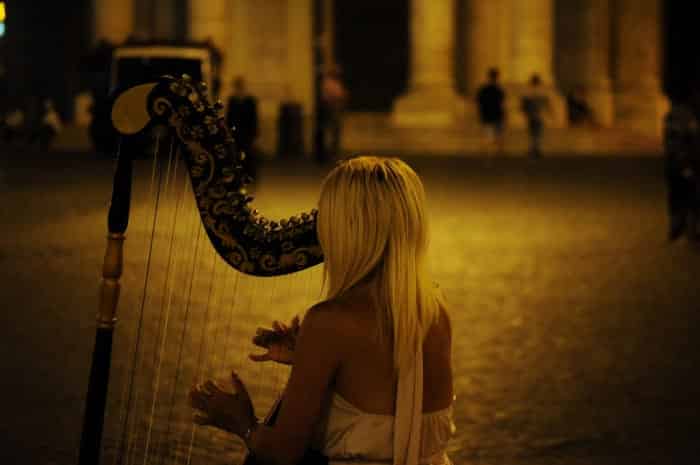 When looking at the harp, people will think of the angel symbol of the cupid's lyre. It is a string instrument and belongs to the ancient lineage; therefore, music artists have been considering harp music as a classical genre.

You're very excited to start learning to play the harp, but what if you don't even know the basics of it? What is herb? How many strings does a harp have?

Don't worry! This post is specifically tailored for you – the future harp player.

Read on, and you are good to go!

What Does the Construction Of A Harp Look Like? Perfectly Chromatic Instrument

The harp comes with a long history; however, it was not until the 19th century that this musical instrument was popular with everyone. 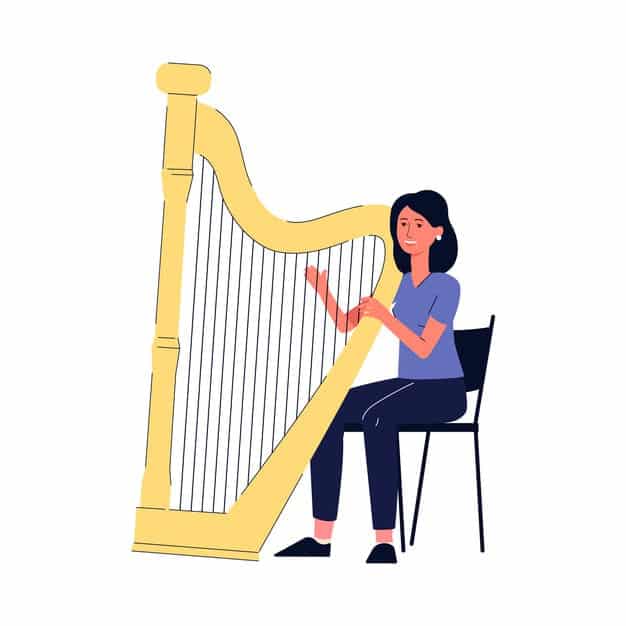 The reason for this trend lies in the pedal systems development. Thanks to it, the player can constantly change the tune while playing. Hence, the harp becomes a perfectly chromatic instrument.

Mostly, players use the seven-foot pedals to change the 47 strings' pitches. The pedals help musicians play various chromatic notes, but the harp doesn't offer any "black keys" like the piano.

As a result, harpists need to learn how to spend a sufficient amount of time adjusting the pedal flexibly so that the harp can produce sharp or flat notes in each same-pitch string.

When harpists raise the pedals, they drive the tools to a flat position. Thus, the strings' pitches are Ab, Bb, Cb, Db, etc. On the other hand, when harpists depress the pedals to their middle position, the tuning pins will stretch each string gently for a natural pitch.

For example, each pedal pulls a separate string, so the harpers could change all the harp's Cs if they alter the C pedal.

The harp manufacturers have always designed the pedals with key changes in mind. Therefore, they will place each additional flat or sharp on the harp's opposite side.

About an hour before each concert, you can see many harpists trying to tune the harps. With up to 47 strings, they always seem to be very focused as the process could take a very long time.

How Many Strings Does a Harp Have?

However, "47" is not the only figure when it comes to harp strings. To find the ultimate answer, you need to consider which type of harp that you want to know.

This harp got its name due to the levers on each string. With this feature, harpists can play two different notes on the same string of their harps.

Normally, there are 22 to 36 strings on most lever harps, but sometimes you can find 19-to-40-string lever harps on the market.

While playing, you have to play the notes and adjust at the same time. With only your hands, there will be mistakes during your performance.

Therefore, the lever harp is the first choice of many beginners. However, since the levers control the strings, harpists need to use both hands to reach the levers to play the harp properly.

This type of harp has another name – modern-day harp. Unlike the lever harp with levers on top, the pedal from this harp stays on the instrument's bottom.

Some models come with 47 strings on their frames, while some have 46 strings.

Apart from that, there are seven pedals on every pedal harp model. Each pedal has three different positions to adjust and increase the notes' ranges while playing.

There are no limits when you choose the pedal harp. With a creative mind, you can perform any music piece. This harp enables you to focus on playing by hands entirely and use your feet to adjust the pedals.

Hence, many potential and serious students advance to the pedal model from the lever one.

Next on our list, we present you the Celtic harp. Many experts assume that the name is from the region where this harp's revival started.

The average number for these harp strings is 30. Among Celtic harp models, there are differences in the string number and variants in the construction.

Some models offer only 22 strings, while some have 38 strings. The tone range of the Celtic harp is from 2 to 6 octaves.

Like its name, the Multi-course Harp has one string row and two, or even three rows sometimes. With the double-coursed model, strings run down its neck on each side of the harp, and harp designers strung the strings as parallel lines.

Normally, each side of the double harp has 23 strings. As a result, there are 46 strings like the modern pedal model, and each pair is for the same note.

You will see that the standard number of this harp's strings is 40 to 47.

When you compare to other types of harp, the only difference between the electric and the lever harp is the electric power source. Yet, recently there are more models following the pedal harp's structural framework.

In ancient Greece and Rome, this harp was one of the most favorite harps. Besides, according to the ancient Mycenaean, the lyre harp had only four strings in the beginning.

The number gradually increased to 8 or 10. Most lyre harps have more than seven strings, and some lyre models even come with 16 strings.

The lap harp showed up sometime between the late 9th to the early 10th century. With its pretty small size, the lap harp has about 18 strings on average.

Some models feature up to 22 strings, while some have only 15 strings. Moreover, this harp can perfectly fit into the harpists' laps.

Since you now know “how many strings does a harp have?,” let us give you extra detail about their tone's range. 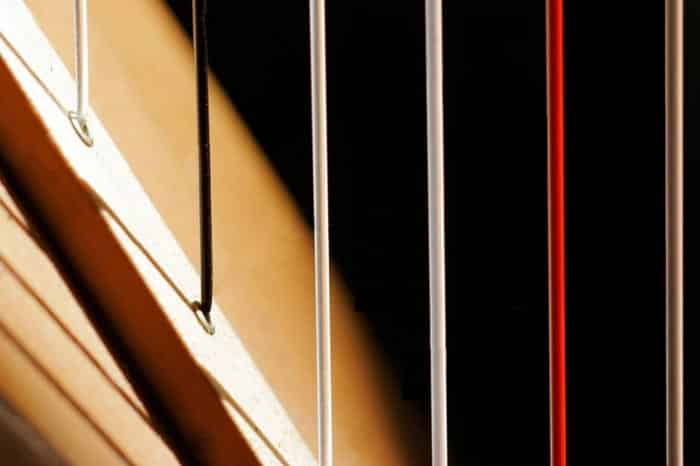 The range covers from C1 to G7, but you will never get lost with all the strings as the color will help you identify which one you want to play: Red is for the C-strings, and black is for the F-strings.

Harpists use different string materials depending on their needs. They will use the steel strings for the low register, the gut strings for the central register, and the nylon when playing notes in the high register.

Besides the string number and the range, you can refer to further information about the harp from Philharmonia (the 21st-century world-class symphony orchestra) for more intensive research into this instrument.

As you know, the string number varies depending on the model and type. After spending time on our post, we believe that now you know "how many strings does a harp have?".

There will be no irregularities that can surprise you anymore.

Hopefully, you enjoy all the awesome facts about the harp and its strings. Thanks for your time!

How Much Does A Harp Weigh?

Harp Vs Lyre: What's The Differences?