It’s hard to resist the beauty of an artist playing some folk or jazz music with an accordion in front of his chest! Accordion once took the world by storm because of the melodic tone it brought.

In Latin America, the accordion is considered a miraculous treasure that can blow the soul into folk music and jazz.

Popular as it might sound, some music lovers still find it hard to have a full understanding of this kind of instrument.

How do accordions work? How to master playing accordions? If those questions are popping into your head, then lucky you!

Here we offer an ultimate paper on accordions. Make sure you read it till the end to have profound insight into this fantastic piece of the instrument! 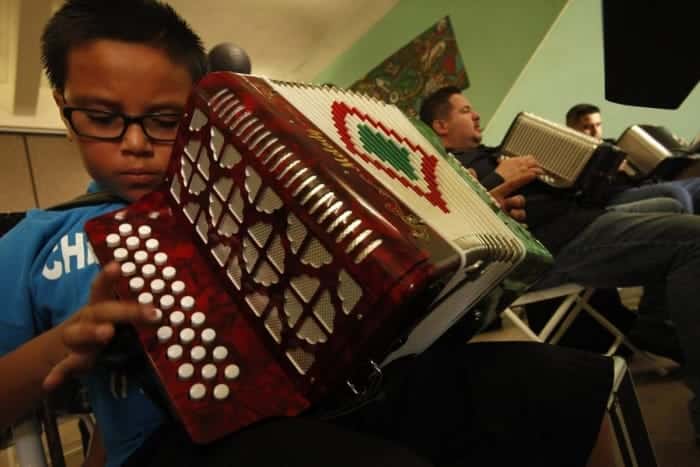 In order to find the most satisfactory answer to the question "How Do Accordions Work?", it is of great necessity to comprehend the different parts of an accordion. 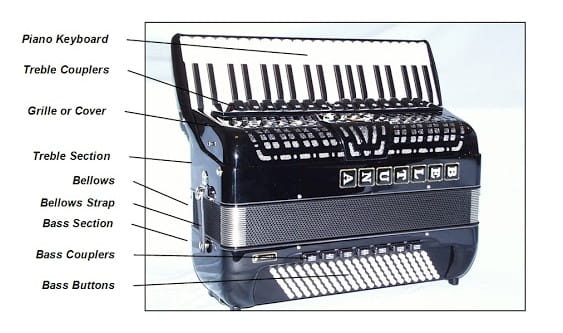 In general, the structure of an accordion varies greatly from type to type. However, there are some universal parts that you can easily find in almost all types of accordions. What are they? And how do they work? Let’s take a look:

Have you ever wondered how an accordion can create a melodic sound? The free reed is the answer in this case.

You can easily find them inside the accordion’s casings, which are located on one side or the other of an accordion.

The most favorable material to make up those reed blocks is usually wood. In some cases, people also use metal for greater durability.

Taking one step further to the reed block, you will find a reed series with a leather valve covering.

If you are familiar with harmonica, you might immediately notice some similarities in the structures of these reed blocks.

It has a structure that is somewhat like the harmonica, with one end tapering from large to narrow.

With the combination of both treble and bass sides, not only the chords but also the melody can be perfectly played simultaneously.

Thanks to this feature, the accordion is granted the title " Versatile musical instrument of all times".  Instead of needing the help of a band, an accordionist can handle everything.

Taking a look at an accordion, which part impresses you the most? We bet that most of you will mention the bellows. Admittedly, bellows are the most noticeable part of an accordion.

To be specific, the bellows, which are dubbed the "lungs" of the accordion, are the ones that trigger the sound of the instrument.

The pull you exert on the bellows determines the special features of the sound being created.

Cardboard and pleated fabrics are the two main components that make up the bellows. Besides, for reinforcement purposes, leather and metals are also used.

You can easily notice the bellows in the middle of an accordion. Its location is fixed with the purpose of linking the treble and bass casing. Bellows operate on a mechanism of compression and expansion. 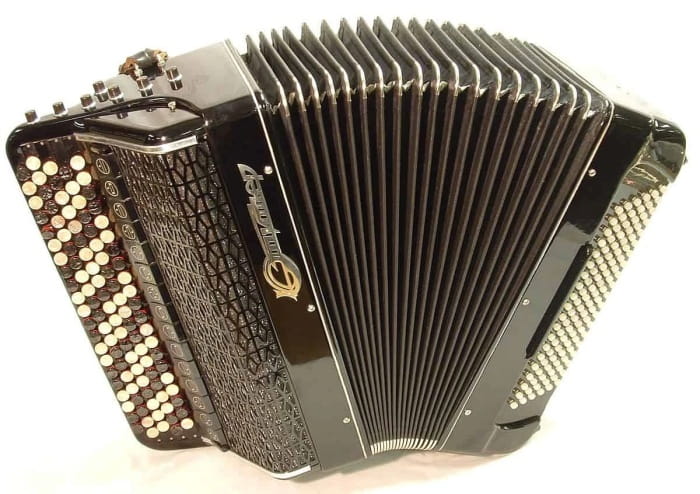 When compressed, the air pressure inside the bellows is created. On the contrary, when you expand, it forms a vacuum.

Thanks to this mechanism, when the air passes through the free reeds, vibration is created, and sound is produced.

The switches, placed on either side of the bellows, allow you to change the “voice“ of your instrument. Thanks to these switches, players can have full control over the timbre.

The sound quality of each note is also reinforced. It is interesting to note that the number of switches is directly proportional to the number of reed blocks of an accordion.

So how does it work?

Specifically, each reed block comes with different octaves or registers. When a switch is clicked, a reed block is opened, and the specific octave or register will be played.

The combination of reed blocks with different octaves and registers will resonate and thereby produce countless different melodies.

Some accordions are featured with similar adjustment blocks. Their differences are adjusted to a minimum. When played together, these blocks create unique sound effects.

As mentioned before, there is a connection between the reed blocks and piano keys on the treble side. Meanwhile, on the bass side, reed blocks connect to a wide range of buttons.

Virtually every accordion uses both the keys and buttons of the piano, but that doesn't mean there are no exceptions. Indeed, some accordions have only bass buttons, and there are only buttons on both sides.

Now, let's dive deeper into these two sides. First, in terms of the treble side, when you press the key, the valves ( which cover the reeds as mentioned above) will open, allowing the air from bellows to enter the reed.

This mechanism facilitates the reed vibration, thereby producing the sound.

On the other hand, when it comes to the bass side, you will notice a lack of valves. Instead, it utilizes a range of levers and rods that adhere to the buttons to activate the reeds.

Most accordions are featured with a special key named "the air button". When the player presses this button, the bellows will be moved silently.

As the bellow compression and expansion mechanism help create various sounds, the air button will work magic in controlling the expected sound of the player.

The piano keys on the accordion are easy to see when you start playing the instrument.

In contrast to the keys, the buttons are invisible from the view of the player, which explains why an accordionist needs to learn and hone his skill at memorizing buttons. This is also considered the biggest challenge for beginners.

The Stradella Bass system is standard for most accordions. For clarity, this system has a layout with column buttons arranged in fifth circles, in a sequence of C - G - D - A - E - B - F.

Even though there are many different layouts, depending on the particular instrument, the most popular one follows a structure of 120 buttons arranged in 6 columns.

You might be wondering if the smaller accordion makes any difference. The answer is Yes, it has fewer columns or rows, but in general, the layout remains unchanged.

In addition to the Stradella bass system, free bass accordions are also popular. This layout and button structure is preferred by European countries over the Americas.

Interestingly, all the buttons are single notes when it comes to the free bass accordion.

How Do Accordions Work?

Now that you have an overview of the accordion's construction as well as the universal parts that make up the complete instrument, understanding the working patterns of an accordion will be just a piece of cake.

In general, the accordion works when you compress or expand the bellows and press buttons or keys at the same time, causing the valve to open.

This creates favorable conditions for the air to flow over the reeds. As a result, the vibrations of these reeds are a prerequisite for inner sound production. 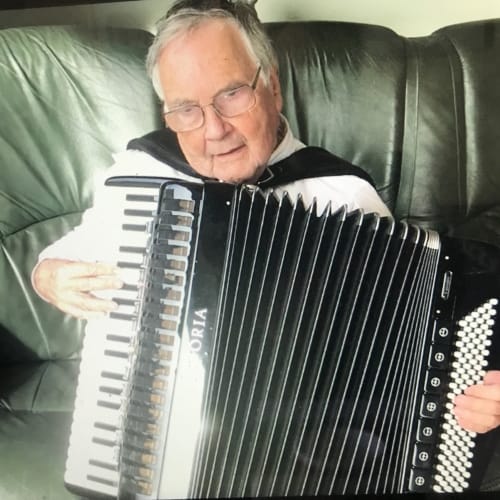 In addition, the reed valves are also utilized to give a louder sound without air leakage. Players often play songs on buttons or keys.

Thanks to this mechanism of operation, the accordion has a very melodic and rich sound. The sound properties of this piece of instrument have never been underrated.

The Accordionist can play one or more notes on the keyboard on the right side and combine chords on the left side. The sound quality of the notes can be controlled by switching between reed combinations.

Some Notes When Playing The Accordions For Beginners?

Are you a beginner? Do you think it is hard to play the accordion as this instrument demands massive knowledge of musical notation?

However, the opposite is true for this case. Just follow our tips, and you can successfully play the accordion without breaking a sweat.

There are many different types of accordions. However, some would be more suitable for beginners than others.

So, please have a careful search to get to know what kind of accordion suits you best. Don’t rush to buy the accordion for professionals and end up getting lost in a maze with no escape.

Besides, take the size into consideration. If you are an adult, you had better start your music journey with a 48 bass accordion because of its compactness, ease of use, and handling.

Use The Right Position

The best place to place the accordion is on your chest. Please note that you should set the posture of the buttons facing away from you.

When you start handling the instrument, your left arm will move in both horizontal and vertical directions.

However, keep in mind that only the left-hand works that way as your right hand just moves vertically. It’s up to you to sit or stand to play the instrument, as long as you feel at ease with it.

Remember to keep your wrists in a direction that is parallel to the keyboard. You’d better avoid bending your right wrist and keeping the elbow close at the same time.

It may be a bit difficult at first, but the accuracy will gradually improve as your hand circulation will not be obstructed. 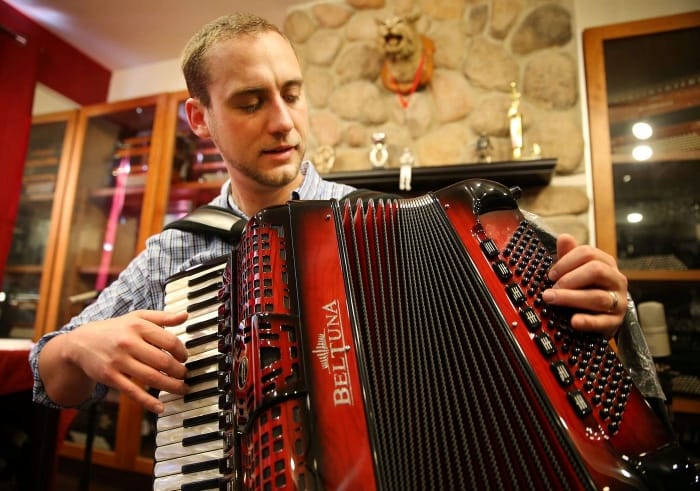 Now, pass your left hand over the strap located below the bass button area. Then, scroll your fingers up and flick through the bass buttons. After that, push the air valve down.

You should be aware that it is essential to use these air valves when opening and closing the bellows while they are in motion.

Never press down on the keyboard when opening and closing the bellows at that moment. The reason is that we just focus on the bass buttons.

The Future Of Accordions: Bright Or Not?

Through its peak period in the 20th century, especially after World War II, the accordion became one of the defining features of that era as people brought it into the woods after each battle.

The Accordion has been a confidant with many generations ever since.

Although there is a strong explosion of electronic musical instruments today, accordions still occupy a unique place in the hearts of music lovers and continue to grow day by day.

Producers are increasingly working closely with performers and composers to make the most of this versatile instrument.

Many of the top conservatories now offer classic accordions in their curriculum and have inspired many young people, which is quite a positive sign.

As a result, we can jump to the conclusion that accordions are expected to see a bright prospect in the future.

Conclusion - How Does Accordion Work?

The Accordion is a versatile musical instrument with harmonious melodies and a unique way of working.

Throughout this article, we have walked you through the most satisfactory answer to the question “How Do Accordions Work?” as well as provide you with some interesting facts about accordions.

This piece of instrumental device is not an inanimate object. It has its own soul, and it speaks to many.

Hopefully, now you have got a more profound insight into this fantastic accordion. If you are still hesitant to play the accordion, give it a try, and we bet that you will never regret it.

Thanks for your time, and see you in the next blog!

How Hard Is It To Learn Accordion?