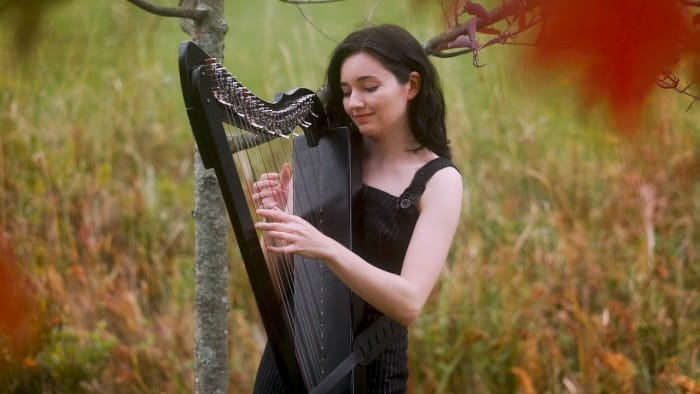 Harps and lyres are both stringed musical instruments that date back to ancient times. These instruments have some similarities in appearance. But in essence, they are completely different from each other.

This article will provide you with a lot of information about harps and lyres to see how they differ from each other. Let’s check it out!

Before finding out the difference between lyre and harp, you should know some information about these instruments. Here is the overview of harps and lyres for your reference.

What Is A Harp? 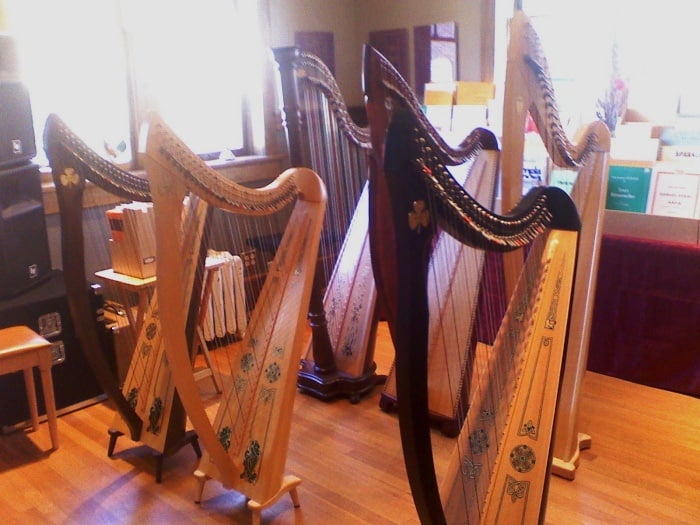 A harp is a musical instrument with many strings stretched perpendicularly to the resonator. The artist will play the harp by plucking or strumming the strings with fingers.

According to research, the harp dates back around 3300 BCE. Since then, this musical instrument has been popular in Africa, Europe, and Asia. In some cultures, the harp is the symbol of music.

The harp consists of a neck, a soundboard, and strings. The materials used to make harp strings are catgut, metal, or nylon. Depending on the size of the harp, it can have 22 to 47 strings. Skin or wood are the materials of the harp's resonator.

The height of a harp varies from 60 to 180 cm. You can play a small harp on your lap. But to play a large harp you will need to place it on the floor and sit or stand to pluck the strings.

There are many types of harps of different sizes and designs. But basically, they belong to 2 main groups of triangular harps and bow harps. The triangular harps have a pillar to support the strings but bow harps don't have this pillar.

The sound produced by a harp is quite similar to the guitar's sound. But the melody of the harp is more diverse and softer. People often play the harp in a symphony orchestra or accompany singing in chamber music.

What Is A Lyre? 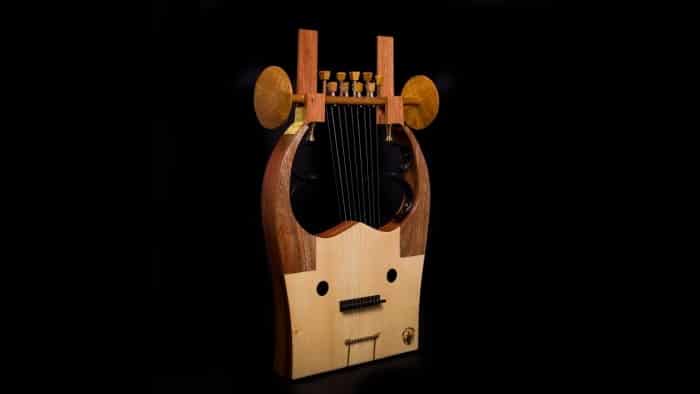 A lyre is also a stringed instrument with strings attached to a yoke that levels with the body. The yoke comprises two upright hands and a crossbar to secure the strings. The appearance of a lyre can vary depending on each type.

Lyres are the instruments commonly played by the ancient Greeks. Studies show that this instrument dates back to 1400 BC. In ancient Greek culture, the lyre is the symbol of wisdom and moderation. Lyres also appear frequently in Greek arts.

The common classical Greek lyre has its body made of wood, bronze, ivory, or bone. This lyre often has 7 strings made of gut.

To play it, you can pluck by fingers or use a wood, ivory, or metal plectrum. You will hold the lyre with one hand and play with the other hand. Sometimes, there is a trap worn over your shoulder to help you carry the lyre.

Most of the lyre players are men. You can use a lyre to accompany singing or just play it alone.

What Are The Differences Between Harp Vs Lyre?

A lyre may look like a small harp, but lyres and harps have distinct differences. Below are the differences between these two stringed instruments.

Both lyres and harps have a resonator or soundbox. What makes them different is how people stretch the strings concerning the resonator.

The strings of half go directly from under the soundbox surface to the crossbar or neck of the instrument.

Then, people secure these strings on the neck with tuning pegs. So, the strings are about 45 degrees vertical to the plane of the resonator. 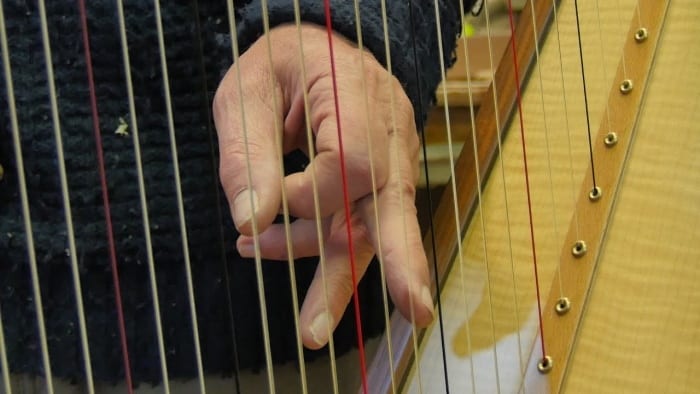 On the other hand, the lyre has its strings running parallel to the surface of the resonator. These strings will pass over a bridge to the bottom of the box.

In some lyres, the strings may go down through the soundhole to an external end-bar under the lyre's body. In this way, the strings of a lyre are parallel with the plane of the resonator.

When the player plucks the strings, the bridge will transmit the vibration to the body of the lyre. This mechanism is like that of a guitar. 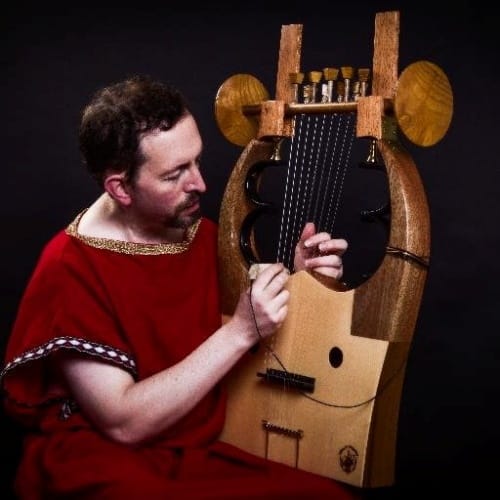 Because of the difference in strings, the sounds produced by a lyre and a harp are not similar.

Each has a different way to transfer the vibration from the strings to the hollow body. The sound produced by a harp is versatile, pleasant, and enjoyable. You can watch video below to know about the harp's sound.

Meanwhile, a lyre doesn't make enough projection for the sound. Most of the sounds are inside the box and you may need support from a microphone or amplifier to hear them more clearly. For more on the sound produced by a lyre, you can watch this video:

Besides, a lyre has fewer strings than a harp. So, a lyre can only play a limited number of songs. Harps are more versatile and you can play many music genres with a harp.

In terms of size, harps are often larger than lyres. The smallest harp has a length of 60 cm whereas a normal lyre is often about 40 cm long. As a result, a lyre is also lighter than a harp and therefore easier to handle.

The shape of lyres and harps is another difference between these instruments. A harp may have an arch, bow, or triangular body shape while a lyre often has a U shape. 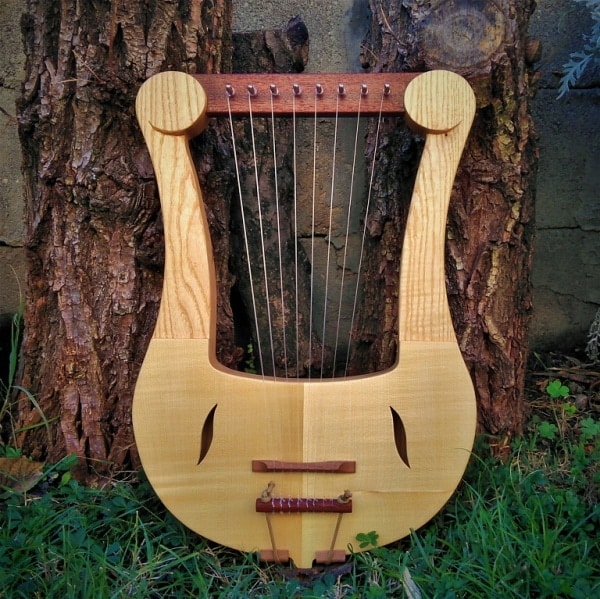 When it comes to origins, a lot of scientific evidence shows that the harp was widely used between 3300 BC and 300 BC.

The first appearance of the harp was in southern Iraq. Later, the ancient Middle Eastern people evolved lyres from the harp with a smaller size for easy carrying and use. Thus, the harp is more ancient than the lyre.

Lyre Vs Harp: Which One You Should Choose?

Depending on the intended use and the sound you like, you can choose a suitable instrument.

A lyre is smaller and has fewer strings than a harp. Thus, learning lyre seems to be easier than learning the harp.

Besides, lyres are cheaper than harps. Therefore, if you want a more affordable and simpler instrument, you can choose a lyre.

However, if you want to be a professional harpist, it's better to invest in a lever or pedal harp. Moreover, with a harp, you can play more music tunes.

Is a lyre a small harp?

A lyre has some similarities in appearance to a small harp. But lyres and harps are two different instruments.

They have different string stretching manners and produce different sounds. They look similar because they both derive from the musical bow.

You will play both lyres and harps by plucking their strings to create sound. But there are some differences in playing these instruments.

Normally, to play the lyre, you will carry it with one hand and pluck the strings with the other hand. You can use your finger or a plectrum for strumming.

For a harp, depending on its size, you can place it on your lap or on the floor to play. People often play the harp with both hands and use their fingers to pluck the strings.

Which one is easier to learn, a lyre or a harp?

A lyre may be easier to learn because it has fewer strings and is smaller in size than a harp. You will have to learn some specific playing techniques.

But this instrument is not very difficult to master. Also, at an affordable price, everyone can have a lyre to learn.

To learn the harp, should you buy a lever harp or a pedal harp?

For beginners, you should learn with a lever harp first. The number of strings of lever harps is smaller than that of a pedal harp. So, lever harps are easier to handle.

You can start with a 34-string lever harp. After mastering the lever harp, you can switch to the pedal harp to play more music tunes.

We hope that with the provided information, you have known more about lyres and harps, and their differences. When choosing between a lyre and a harp, you can consider your preference and intended use.

If you want an instrument that is easy to use and affordable, a lyre is a good choice. A harp will be a worthy investment if you aim to learn the harp seriously.